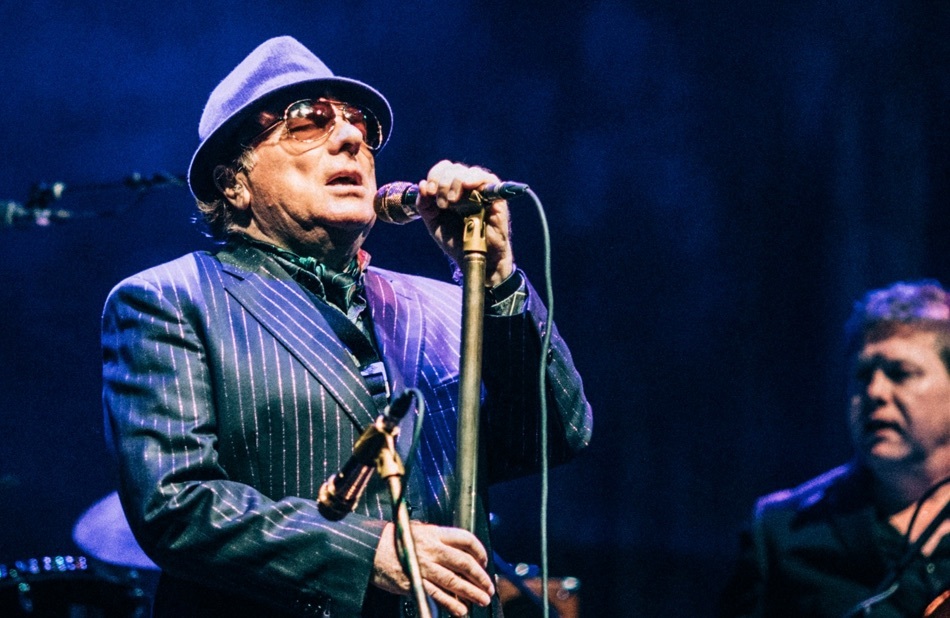 ​Van Morrison must be feeling fine with his muse these days. His latest and 36th studio album, “Keep Me Singing,” arrived last fall, featured all originals but one, and cracked the Top 10 on the Billboard 200.

And after a few years where he didn’t come around Southern California much anymore he arrived Friday for the first of three nights at the Ace Hotel in downtown Los Angeles just a little over a year from a pair of sold-out shows at the Shrine Auditorium just down the road.

Of course you have to speculate as to how Van’s feeling because he’s never been much of one to tell you, preferring to let the music do the talking, but we’ll stick with our hunch that all is good in Morrison Land because the show on Friday was a joyful display of Morrison at his best.

He walked on stage at 8 p.m. sharp as is his custom, dressed as always these days in a fedora, dark sunglasses and a sharp dark suit, kicking off the night with “Too Late,” the one song he’d play on Friday from the new record. “Have I Told You Lately” followed, and as he sang what’s certainly one of his greatest love songs one or two fans in the crowd shouted out, “We love you, Van!”

The night that followed stayed on that track: warm and loving songs for the most part, the audience wrapped up in the moment, Morrison delivering a career-spanning set that as he’s inclined to do didn’t repeat much of what he’d played in concert here a year earlier, maybe six or seven songs repeated in the 19 that he scattered over the hour and 40 minutes on stage.

Why repeat yourself, though, when there’s so many wonderful songs in your catalog, even if the biggest radio hits – numbers such as “Wild Night” and “Moondance,” both of which had many in the crowd up and dancing – are knocked off early in the set so that other numbers get their chance to shine as the night rolls on?

Those two songs were a blast to hear and sing along to, but the emotionally moving stuff unfolds at a slower but equally rewarding burn. One of Morrison’s great talents is the ability to take his time inside a song, feeling the heart of its lyrics and conveying that as he let’s each word fly, his phrasing always strong even as it might change from night to night.

He’s fond of mashing up a handful of songs into a medley and on Friday as he seamlessly slipped through tunes such as “In The Afternoon” into “Ancient Highway” and then “Raincheck” and then a bit of Big Joe Turner. It’s an awesome thing to see and hear him feel his way through those changes.

Friday, of course, was St. Patrick’s Day, and though many in the crowd were wearing their green, and the bartenders were certainly pouring more Jameson’s Irish whiskey than usual, Morrison’s sole nod to the day was a rollicking performance of “Star of the County Down,” a traditional Irish song he recorded with the Chieftains. The crowd’s reaction was so big to that one, though, that Morrison seemed more energized than at any other time in the show, singing and gesturing with abandon as the song raced to a close.

He’s 71 years old now, and in addition to playing saxophone, harmonica and guitar at times, his voice remains his strongest instrument. And whether it was the venue or the mixing, it was much, much clearer in the mix than at the Shrine a year ago, every word distinct whether he and his tight band were playing at high volume as on a medley of bluesy numbers that included “Baby Please Don’t Go” and “Parchman Farm,” or on a softer tune such as “Whenever God Shines His Light.”

The night ended with a pairing that perfectly illustrated Morrison’s ability to go from an ethereal moment of divine ecstasy to the earthy longing of man within a few scattered breaths.

“Ballerina,” the one track he played off his iconic “Astral Weeks” album, found him rocking back on his heels, holding onto the microphone and stand with both hands, as the spirit carried him and his voice to improvised heights, and made for the most moving moment of my night.

“Gloria” followed to wrap the show and its raw passion hit a different part of your soul with no less power, Morrison growling out the lyrics, finally singing himself off stage as the band roared on for nearly 10 minutes more, a coda for the powerful job the boss had delivered.