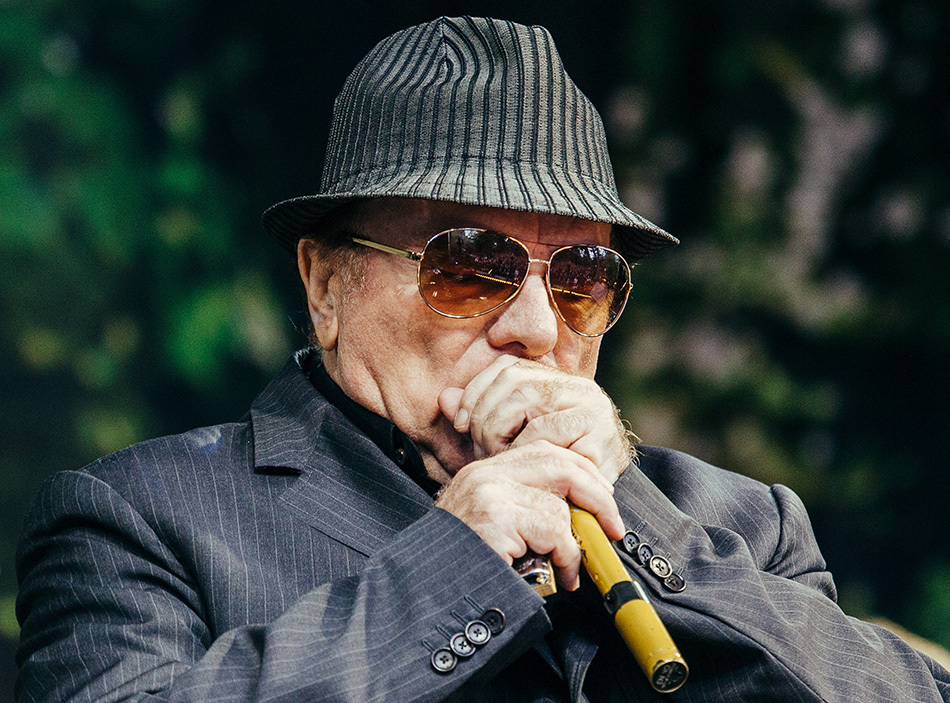 Born in 1945 Van heard his Shipyard worker father’s collection of blues, country and gospel early in life. Feeding off musical greats such as Hank Williams, Jimmie Rodgers, Muddy Waters, Mahalia Jackson and Leadbelly he was a travelling musician at 13 and singing, playing guitar and sax, in several bands, before forming Them in 1964.

Making their name at Belfast’s Maritime Club, Them soon established Van as a major force in the British R&B scene. Morrison’s matchless vocal and songwriting talents produced instant classics such as the much covered ‘Gloria’ and ‘Here Comes The Night’.

“...there was never any suggestion that Morrison, one of the most prolific recording artists and hardest working live performers of his era, would ever rest on his laurels.”

Morrison would weave these and myriad other influences into the albums that followed in quick succession.

Reflecting on new life in America on the joyous Sinatra soul of Moondance (1970) and the country inflected Tupelo Honey (1971) he summoned old spiritual and ancestral life in the epic St Dominic’s Preview (1972) closer track Listen To The Lion.

Double live album Too Late To Stop Now (1973) highlighted Morrison’s superlative performing and bandleader skills. Mapping out a richly varied musical course throughout the 70s he shone among an all-star cast including Bob Dylan and Muddy Waters on The Band’s Last Waltz.

Indeed, borne of his Irish Showband instincts, the magic of the live performance has been a consistent feature of Morrison’s career.

Settling back into life in the UK in 1980 he released Common One an album centring on Summertime In England an extraordinary invocation of literary, sensual and spiritual pleasure the song would often become a thrilling improvised centrepiece to his live shows.

Steering his own course throughout the 80s on albums such as No Guru, No Method, No Teacher he claimed Celtic roots with The Chieftains on Irish Heartbeat. Teaming with Georgie Fame brought new impetus to his live show while Avalon Sunset saw him back in the album and single charts by the decades end.

Van Morrison continued to advance on his status as a game- changing artist through the 90s and into the 21st century.

Awards and accolades - a knighthood, a Brit, an OBE, an Ivor Novello, 6 Grammys, honourary doctorates from Queen’s University Belfast and the University of Ulster, entry into The Rock n Roll Hall of Fame and the French Ordres Des Artes Et Des Lettres - attested to the international reach of Van’s musical art.

Yet there was never any suggestion that Morrison, one of the most prolific recording artists and hardest working live performers of his era, would ever rest on his laurels.

The breadth and reach of his collaboration work continues in 2015 with the release of his new album ‘Duets: Re-working The Catalogue’. Featuring singers as influential and diverse as Bobby Womack, Gregory Porter, Mavis Staples and Michael Bublé, the album re-works songs handpicked from Morrison’s catalogue of over 360 tracks across his career. Including songs such as Real Real Gone, Higher Than The World and Irish Heartbeat, the album was recorded in his home town of Belfast and London over the last year, using a variety of musicians and fresh arrangements.

With one of the most revered catalogues in music history and his unparalleled talents as composer, singer and performer Morrison’s past achievements loom large. But, as throughout his extraordinary career, how that past informs his future achievements and still stirs excitement and keen anticipation.

And so in 2017 Van released his 37th and 38th studio albums, the first of which, Roll With The Punches, is a blues flavoured offering. The 15 track album reconnects Morrison with artists such as Leadbelly, Lightnin’ Hopkins, Little Walter and Bo Diddley…musicians he first heard at home on the family radiogram. But more so, it brings Van together with musicians he encountered on the road during his time with Them in the ‘60s blues boom as Chris Farlowe, Manfred Mann’s Paul Jones and The Yardbird’s Jeff Beck all make contributions to the recordings. The rich jambalaya enjoyed on Roll With The Punches is Van Morrison both looking back, and moving forward. And though he references the past, Morrison always makes it his own, stamping his unmistakable spin on what has gone before.

Following shortly after the release of Roll with the Punches was the aptly titled Versatile. This album sees Morrison cross the genres of blues, soul and reconnect with his love of jazz. Across Versatile’s sixteen tracks, Van Morrison interprets some of the very building blocks of modern music in his own utterly unique style.  As well as songs originally made famous by the likes of Chet Baker, Frank Sinatra, the Righteous Brothers, Tony Bennett and Nat King Cole, Versatile features the stunning new Van composition Broken Record – a timeless piece of late-night swing – and new interpretations of classics from his back catalogue (I Forgot That Love Existed from the 1987 album Poetic Champions Compose, Start All Over Again from 1990’s Enlightenment and Only A Dream from 2002’s Down the Road).

2018 is a significant year in Morrison’s career, marking 50 years since the release of the iconic Astral Weeks album in 1968. To date, the year has been full steam ahead for Morrison beginning with a string of shows in the USA and further shows scheduled for Europe later in the year. Morrison shows no sign of slowing things down, continuing to work on new material and exciting upcoming projects.